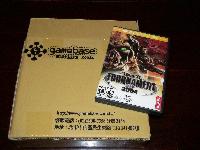 今天沒有中文日記,偶爾也來逆向操作一下^^
I just got the “Unreal Tournament 2004” PC game this morning which I pre-order last month. This is a special version which called “Editor’s Choice Edition”. This version includes the DVD game disc and an extra bonus DVD disc. The bonus disc has many movies which teach you how to design your own level with the Unreal editor. This version imported from the U.S. Guess what. It’s only cost me NT$1,280. It is not expensive.
How is the game? I played on line and it’s great. I think this is the best FPS PC game for this year. ^^ Lots of people may think Doom3 is the best FPS game this year. But I really don’t like Doom3, It’s too dark and too horrible for me. ^^